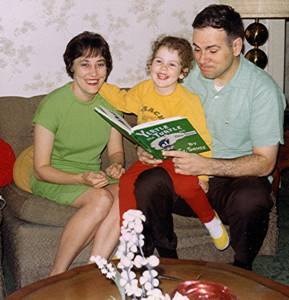 I found this photo in with a bunch of other things that one of my uncles sent us a number of years ago. He took the time to scan photo albums his mom had and then sent us copies. It was not until my dad died and I was looking for photos of him for his wake that I came upon this one. I look at this photo and then recall the life I thought I led with them and wonder how can these two things be so different? This looks like something that would come out of a magazine. We definitely did not live a magazine type of life. I’m not saying it was like a horror story but it sure was not perfect like this photo suggests.
So why share all this? Well, I find we are constantly comparing ourselves with what we see on the outside. If Facebook, Instagram, or Twitter were around in 1968, my parents’ friends would have thought all was well. They may even envy the beautiful dress my mom is wearing. The problem is when we compare ourselves to what is posted we are comparing ourselves to a false reality. Most people only put the good stuff out there. When someone does get real, most people find it to be too much, a way to get attention, or some other negative aspect.
Looking at that perfect angelica child…Let’s start with the fact that I am 3 years old and my hair is neat. Not a reality most of my childhood. I have a ton of hair with a mind of its own. Mom tried to control it, but my hair won out most of the time. I noticed my face and clothes were clean, so this meant that we had not had anything to eat yet. I even have both shoes on with matching socks. I recall the matching socks being somewhat regular but shoes? Not a chance.
Mom looks great. She is dressed in the perfect dress with the perfect hair and make-up. But look at her hands, they are clenched. She is a nervous wreck. How do I know? My mom obsessed about what others thought all the time. She struggled to see that she was good enough. She found herself in the shadows of many others who did not have what she did, but she went unnoticed for a variety of reasons. Some of it had to do with the times and how women were viewed. Other issues had to do with growing up on a farm and existing now in the city. That dress I mentioned earlier, she didn’t buy it. It was a gift from my grandmother who was a buyer at Carson Pirie Scott. I am sure we could not even begin to afford such a dress.
Now my dad is what makes me laugh the most. He has that crazy look on his face. He would try to use humor, so he didn’t have to be serious or deal with certain issues. Often his humor fell flat and made things worse. But here he is ‘reading’ me a story. Why is this funny? Because dad was blind. He had injured his eyes when he was 14-year-old. By this time, he would not have been able to see the words on the page. That didn’t stop him from making stories up and acting silly.
So stop and think…is what I am seeing, the real deal? Why am I comparing myself in the first place? When we compare ourselves to a false reality we come out at the losing end. Not a good place to live your life.
Until next time…
Change. Discover. Transform.
Carla Carter, Ed.D., LCPC, CMPC, EMDR Certified