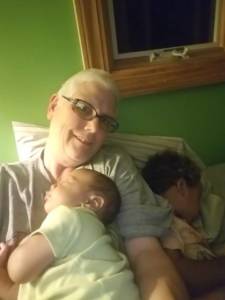 Co-sleeping (often spelled cosleeping, and also known as bed sharing or having a family bed) is the practice of having your infant in your bed with you during sleep. Co-sleeping promotes breastfeeding and bonding, and it is safer than crib/cot sleeping when practiced correctly. Co-sleeping beyond the breastfeeding years is common in many non-Western cultures, and even in the West many families choose to extend co-sleeping through toddlerhood and well into middle childhood.
Infants and children sleeping in isolation is a recently devised cultural practice to which the human species is not adapted. Our young thrive and grow optimally when they feel safe — in close proximity to familiar, nurturing caregivers — especially during sleep, when they are most vulnerable. Open-minded parents who’ve learned to “think outside the crib” are discovering that co-sleeping is one of the easiest ways to give their children a healthy start in life.
When my daughter was born I made sure that she slept in the bassinet in my room for the first 6 months and then I transitioned her to her own bed. I was strongly opposed to having her sleep with me. At the time I thought she would grow to be too dependent on me. If she got up in the middle of the night I would tell she could stay as long as she built a sleeping nest on the floor…not the bed.

Fast forward 28 years and I now have a bed full of children and dogs. Now there is a shift. After my 2-year-old grandson was born, my daughter practiced the same way I did. He slept in their room for about 3 months and then began sleeping in his crib. He was an awesome sleeper. He loved being in his bed. Then my daughter became pregnant. About 3 to 4 months before the newest baby was born the two year would start waking up screaming. He was having some sort of nightmares. Each of us would try to calm him and help him get back to sleep. It would last only a short period of time and the nightmares would return. This made for many sleepless nights. Then at the end of June, my daughter said she was too tired to continue like this and decided to let him fall asleep in my bed (the biggest and most awesome bed). The thought was to then move him to his own. That did not work. After a few times I just told her to leave him and he slept through the night. No more nightmares. Now he is my nightly bed mate. Even though I was dead set against it when my daughter was little I love it now. Now that the newest one has arrived, he too will join us on occasion. He has his bassinet in whichever room he is sleeping in.

Strangely I find that my time with my boys is precious. I can not imagine it any other way. I know that it is doing me just as much good if not more good than them.