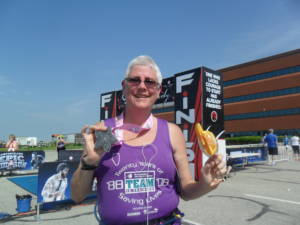 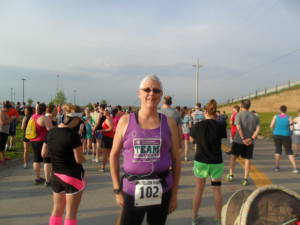 Five years ago I traveled out to Kansas and Nebraska to run two half marathons. Physically and mentally I was prepared. Yet there were still some variables that could make or break a race. The biggest one that was looming for me that weekend was the weather. I had been following it for the better part of two weeks. The forecast consistently called for extremely rough weather in the form of thunderstorms. Races go on no matter what except if there is lightening, tornados, and extreme heat. All were possible. I have run in all types of weather. I pay good money for the races and a lot to get out to these races. I have a mindset that that I must race no matter what. That can be good and bad. Saturday came in a bit cloudy (a good thing) but as the day went on it got HOT. It reached the mid to upper 80s by the time we all hit the 10 mile marker. The course was extremely hilly. There were about 15 hill sets that were particularly long. I remember thinking, “I am working hard but I am not struggling.” That is a great place to be.

As I was coming into the last mile, I came across two women. The first was walking slow. She was clearly exhausted and angry. The second was jogging in place and was turned around facing the first woman. I could see the second one pointing to her head and could imagine her saying something like “It is all mental”. As I closed in on them, I said, “Your friend is right. This last part is all mental. You have already destroyed 12 miles and now you just need to finish off this last mile.” Her response was…”She is not my friend. She is my coach. I @*$#ing hate her guts!!” I was not sure what to say at first. Then I said, “I am one of those too. My girls feel that way about me at times as well. But they are powerful women just like you.” I got daggers shot at me.

So off I went. There was a lot of toxic energy out there and I wanted to finish positively. So as I ran I shouted things like…I am victorious over all those hills. I have conquered 12 plus miles this last one is nothing. I am a powerful woman. On and on I went until I crossed the finish line. It was a day that should have zapped me of all my energy…hot, hilly, buggy, humid, late start…but my mental status allowed me to feel confident, rested, and victorious. I was feeling so good that the next day when I was in Nebraska, it was cooler and rained for about half of the race. I went into that race just happy that any tornados predicted were not in the area. Then a fellow runner came along side me and we ended up running a good portion of the race together. My positive attitude that weekend yielded me two things. First I did exactly the same time both days. Usually the second day is slower. I actually felt stronger on day two. Second, it yielded me a friend. Because I was in the right frame of mind I could be open to relating to other runners and I had the best set of conversations with my new friend.