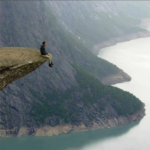 At the end of January 2014, I felt like I was just resurfacing after falling off the edge of a cliff. My parents had been talking about taking a vacation for several months prior to this and the idea of Disney World kept coming up. So, I did some research and we decided to go. I say we because they could not go independently. My dad was 77 years old and was legally blind. For him, blindness was not so much the issue. He also had poor endurance and could not walk more than a block without stopping to catch his breath. My mom was 82 years old and had dementia. Physically, she was capable of walking, but cognitively she psyched herself out or forgot what she was doing. So, for 7 days, I navigated the world of Disney through the eyes of two elderly folks. I learned a lot.
When obstacles came (and they came fast and often), my parents tended to the negative side of things. I realized I used to be like that too. Of course, I can still go there in a heartbeat. However, I have learned over the years how exhausting and counterproductive that type of mindset can be. I struggled throughout the week to maintain a positive attitude. I found myself sleeping for only an hour or so at a time because my mom got up frequently in the middle of the night to go to the bathroom and could not navigate it herself. My patience was tested as she would throw herself on the floor of an exhibit, begging for someone to help her get out of there because she was scared. (Mind you we were trying to leave but she refused to pick up her feet, so we could not move the wheel chair.) My impulse was to scold her, but I needed to remind myself over and over that she was overwhelmed and acting out in the only way she understood.
Each day I learned a different trick and used it to make our vacation as enjoyable as possible. The primary thing that saved my sanity was to maintain (or return quickly to) a positive healthy attitude. It would have been easy to allow myself to get sucked into all the negative but then we would have ended up sitting in the room crying. What kind of vacation is that after all?
Positive mental attitude + difficult situations/circumstances = the best outcome for everyone.
What about you? Do you have stories about when your positive mental attitude saved the day? Share them with us.