Sitting in the AMEN! section 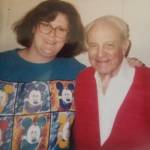 Sitting in the AMEN! section of a church I once attended, I met Walter Laundry. The AMEN! section was located on the right-hand side of the church and 3 rows back. I had just started attending this church and it was much like the one I had grown up in, as in completely silent expect when we were singing hymns, or the pastor was speaking. Growing up, I knew it was not how I wanted to worship but I did not know anything else. Then came Walter. When he heard something that he liked or agreed with, he would shout AMEN! To say this was not considered normal would be an understatement. Walter did not care. The first day I attended this particular church, I was lucky enough to sit next to Walter. I distinctly remember the stares people gave him during services. Then after service, people would make ‘jokes’ about the AMEN! section. Nothing was funny about them. They were clearly said in a judgmental fashion. Walter did not care. For many years, I continued to sit with Walter. We would often have lunch and talk about everything. I learned so much from him. What he taught me can apply anywhere in life, not just church.
1. Be yourself. Walter did not shy away from expressing himself as he was. He did not try to be someone just to fit in. He could have sat there silently but I suspect he would have eventually exploded or maybe it’s imploded.
2. Just because you can hear the hecklers does not mean you have to respond and you definitely do not have to believe what they say. Walter knew his way of worshiping in that church was not the norm. He also knew that he was not harming anyone. Different does not always mean wrong. In fact, different rarely means wrong.
3. Friendship transcends generations. There was at least a 60-year difference in our age. Yet we could spend hours talking about all sort of things. Conversation was always easy between the two of us. The interest we had towards each other was genuine. Neither of us felt the burden except maybe when we had to skip a lunch date.
Walter passed onto heaven a long time ago and yet his memory is still alive in my heart. This photo hangs on my board in my home office along with all the other family members. Do you have someone that is special like this? Someone you have learned so much from? What are the life lessons you learned from that person?
Until next time….
Change. Discover. Transform.
Carla Carter, Ed.D., LCPC, CMPC, EMDR Certified