What is growing in my garden? (PART 4)

We found an unusual plant growing in our butterfly garden. My plant ID app identified it as Mullein. After a little research, I found an abundance of uses for it. Mullein is not only known for antiseptic qualities and to treat upper respiratory ailments, but its leaves have been used as wicks for torches and band aids for thousands of years.

Mullein Smudge Stick
Making this smudge stick was fun and easy. I simply took a few large leaves and rolled them, fastening with thick cotton string. The smoke from this smudge stick cleans the air and helps you feel grounded.
Mullein is a natural expectorant and it has been used for centuries to treat unproductive upper respiratory problems, as well as asthma. Inhaling the smoke of the mullein is known to sooth and clean the lungs. I tried the smudge stick, although the smell wasn’t very pleasant, it sure cleared my lungs and the air pretty quickly. 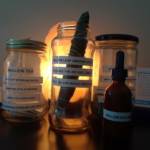 Band-Aids
Mullein can be used as a band-aid. Simply cut a portion of a fresh leaf and place on your sores and cuts. You don’t need much, just enough to stick to your cut. Dry the remainder of the leaf for tea.
I tried this on my heel that had been rubbed raw from wearing my dress shoes. The relief was immediate. The leaf bonded with my sore, causing it to heal up in less than a week. I treated the back of my other heel using a bandage and Neosporin, and 2 weeks later, I still have a large area that isn’t completely healed.

Disclaimer this Mullein should not be ingested or applied to any part of your body if you are suffering from Diabetes. It’s known to lessen the effect of medications used in the treatment of diabetes.
I hope you’ve enjoyed this blog and see that some weeds have more going on than you would suspect. I plan on exploring more plants, focusing on their healing abilities and
their other uses and hope to tell you more about them. The next one will be lavender.
~Namaste~
Rita