You are my person 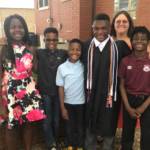 My best friend is moving to Arizona with her kids and today’s the day she is leaving. I woke up crying, feeling selfish for doing so. Her son is a celebrity around our parts. He’s a soccer prodigy. He played with U-12’s when he was 8 and kept control of the field. This year, he was one of 18 kids in the US chosen to represent our country in Barcelona, Spain. At 13 years old, he will take part in an Olympic training program. He’s been interviewed by newspapers and featured on tv. He’s going to be a star, but actually, he already is one. Brooklyn has played soccer from the moment he could walk. It’s his first and only love. He plays soccer against the dining room wall that we turned into a mini soccer “stadium” with AstroTurf and nets. He plays when he wakes up and as soon as he gets home from school. He spends a couple hours a day, when he’s not at a tournament or playing with his home team, practicing drills with his mom. Susie has never wavered when it comes to fostering Brooklyn’s dream of ultimately playing professionally. Therefore, she’s packing up 4 of her 5 kids and trekking across the country, to bring Brooklyn’s dream into fruition by sending him to an academy geared towards the development of future soccer stars.

She is only bringing 4 of the 5 because her oldest son was accepted into Dartmouth and school starts in the fall. Susie put the same amount of effort into helping Arthur tap into his potential. He’s become the type of man that every mother wishes their son will become. Arthur is a solid and intelligent young man. He’s a chef, landscaper, athlete, and overall amazing person.

There is one girl in the bunch named Satta. We call her the perfect child. She is a talented artist, a straight A student, a loving and protective big sister, and is one of the funniest people I’ve ever met. She’s a great person, growing into an awesome person, one that I would love to see grow, and see where her life takes her.

Then there are the 2 “little” boys who aren’t so little anymore. This is the hardest paragraph to write. My heart is breaking, and the tears just won’t stop. When they became part of Susie’s 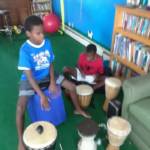 family, they were 3 and 5 years old. They had a rough start and the first few months to a year were so hard on Susie. Slowly with Susie’s encouragement and consistency, the boys grew into their best selves. I love all her kids with all my heart, but the bond the boys and I developed is the strongest. I can give dozens of reasons why, but it was the moment that I sat down to start my yoga practice only to look at my side to see the youngest boy, only 3 at the time, quietly sit next to me emulating easy pose, bringing his hands to his heart with complete sincerity. This is the moment I fell in love with that sweet little boy. The older of the little boys is a sensitive soul, who I can relate to easily. I recognize myself in him and he’s helped me learn to love myself. What a wonderful gift. He found his niche in music, being able to play any instrument with ease and having a firm grasp on music theory by 8 years old. We’ve had many adventures in the past 5 years or so and found so many common interests. We built a spectacular butterfly garden. We’ve created some killer Harry Potter wands, and we became yogis together. They are my junior teachers. They live by the yogi code and when we teach other little ones, they’re supportive and humble, understanding that we are students, first and always.

I’m not sure how to go on without being a part of their lives. I can’t wrap my head around the fact that they’re going to keep growing and I won’t be there to see it. This is the sweet spot, where children still look up to adults and aren’t embarrassed to be seen with them. This the time where they still have that little boy smell as they lay their head against you and snuggle. They’re not going to be the little boys I know now for very long. They’ll be growing into teenagers. The time for being the little guys I know them to be will be gone in a flash of the eye.
Most of all, I’ll miss Susie. She is my person. She will always be my person, no matter how far she goes. She is the bestest friend I’ve ever had. I know what she’s doing for her family is a big sacrifice to her, but she’s charging ahead and doing what’s right. She always does what’s right. She has created an amazing family, going to Liberia twice and adopting 3 beautiful children while she was still in her 20’s. Then becoming a foster mom to 2 little boys, and eventually going on to make them a permanent part of her family. She never put her children 2nd, always understanding and meeting their needs. When she left this morning she said, “We’re just going to Minnesota for a tournament, then to Arizona just to try it on, so it’s not goodbye.” I hugged my sweet little Brooklyn, telling him how much I loved him, and I know he’ll go on to do great things. But for now, they’re just going to Minnesota and we’ll see each other soon.