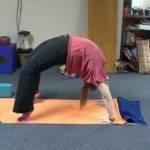 Every Thursday night after my quiet and soothing Hatha Class, I have a class that has morphed from Candlelight Vinyasa Flow to Yoga Playtime. My original vision involved the soft glow of candlelight, Deva Premal chanting “Om Namo Bhagavate/Gayatri Mantra” quietly in the background, a group of advanced yogis performing the Primary Series in perfect unison, where I could cue in Sanskrit and everyone would understand. I had big dreams for this session, confident that it would spiritually transcend all the practitioners as well as myself. But that’s not what happened, and I couldn’t be happier.
It took on a life of its own, heavily influenced by my friend, former teammate, and fellow yogi named Cooney. We played flag football together a few years back, and even though it was with a bunch of girls, it tended to get pretty violent. There were broken arms, dislocated knees, crushed clavicles, split lips and bruises for days. It was awesome! Needless to say, neither of us are prone to shrinking from activities that may cause pain and potential injury. The sessions started out pretty calm. We would do our flow and I lit candles, cuing in Sanskrit until I’d hit Up Dog, which wouldn’t come out right no matter how many times I’d try. Cooney would laugh and so I stuck to English after that. We both like the book The Mists of Avalon, so I made a playlist of Medieval music, sans the harpsichord since Cooney mentioned she wasn’t down with it. The class was still calm and focused, until one day when I asked, “Hey you want to do handstands?” and I got a “hell yeah”. So we did, taking turns spotting each other and having a blast. I said, “Next week you want to try the wheel?” Her response was, “That sounds dangerous, let’s do it!” Soon the playlists started to transition to 90’s hits with plenty of Back Street Boys, with a side order of “Me So Horny”, which made the balancing series so much easier. You tend not to over focus when you’re laughing so much. Next thing you know Cooney brought her mom who happily requested tango music for the session, complementing the fun flavor the class had taken on. Soon we were using mat length boards I found on a curb, which I sprayed with copious amounts of furniture polish, bringing us up to date with the latest craze, Vinyasa Slide. This practice forces you into jump troughs, the splits, transitions, etc.… You name it and once you start the movement, you have no choice but to follow it through to the end.
Candlelight Vinyasa morphed into Yoga Playtime, but it also opened up more curiosity for Cooney about the Doshas. She took a test to see which Dosha she aligned with. It was great that she did, because it helped me understand exactly the type of session she would get the most from, and she learned all about what foods she could eat and which to avoid. She learned about what was best for her mind, body, and spirit, and what they need to work together in harmony. I learned to be braver and I became braver in her presence and started to push myself to try more challenging yoga practices. I started to become more confident. I started to have more faith in my abilities, which helped me have more faith in my students. I started challenging my fellow yoginis in our sessions, while witnessing their confidence grow. They started approaching the classes with open minds, and soon they realized that the pose that freaked them out the most was not so scary after all.
I get so excited for Thursday nights, letting the class flow into the direction it wants to take. Last week Cooney suggested making up our own names for the poses. Marichiyasana C became “Unsalted Half Pretzel. B became “Twizzler”, but morphed into “Red Vine”, which is the generic version of the sweet treat. I’m not very sure which pose was renamed “Bad Date”, maybe some kind of seated forward fold.
Through our journey, I made the promise to watch the new Battle Star Galactica, and Cooney agreed to watch 3%, a show that freaks her out because it’s made in Brazil and dubbed in English, so their words don’t match their lips. I keep telling her to hang in there, it only gets better! This weekend I will dive into Battle Star Galactica, which freaks me out being outside of my Sci Fi comfort zone. But who knows, I might love it and get hooked. The only way to find out is to keep an open mind, and approach it with curiosity, just like Cooney taught me.
~Namaste~
Rita