He’s as bad as he wants to be… 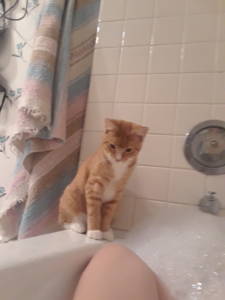 His name is Franky Reynolds and he’s my cat. My friend, Libby, called and asked if I wanted him. It was that or she was going to bring him to a shelter, seeing as her daughter was allergic. 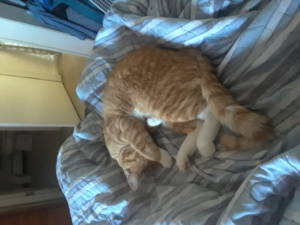 There was an adjustment period that lasted a couple of weeks. The biggest problem is our beagle Jonah. He is normally placid, so much so that I poke him just to make sure he is alive. Jonah realized Franky was afraid of him, so he proceeded to antagonize Franky every chance he got.

Franky moved into a cabinet from which he would emerge when he was hungry, wanted to use his litter box or get some snuggles. He stayed out of the Jonah zone.

Fast forward to the past 3 weeks. Franky has become completely acclimated to our furry and furless family. He realizes that Jonah is not a threat and stalks him, He comes out of nowhere and slap, slap, slap. Jonah yelps and runs away. He waits at the bottom of the stairs and hisses at both dogs every morning, causing them to run in fear. He loves water and jumps in and swims when I take a bath. If I touch something Franky needs to touch it too. This has led to daily disasters, including demolished dried flower arrangements and disseminated herbs covering the kitchen floor. Knocking everything off the tables, usually on to the dried arrangements and herbs, is a typical event. Taking my Starbucks cold brew from Jonah and going to town, tipping it onto the carpet happens. He takes flight from the top of the fridge, landing on my shoulder to get a closer look at what I’m doing. He gets me every time. The best is attacking me during yoga. Franky hates yoga. So yeah, I have a new pet named Franky and he has no fucks to give.
Peace out,
Rita