What is that growing in my garden? (PART 2)

We found an unusual plant growing in our butterfly garden. My plant ID app identified it as Mullein. After a little research, I found an abundance of uses for it. Mullein is not only known for antiseptic qualities and to treat upper respiratory ailments, but its leaves have been used as wicks for torches and band aids for thousands of years. Last I shared about how to make ear drops. This week I want to highlight tea. 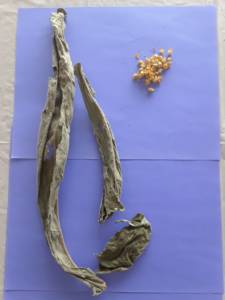 Tea Time
Mullein tea can also be used on the skin as an anti-inflammatory and antiseptic. I took a few mullein flowers and left them on a paper towel for 16 hours on my dashboard, drying them out to a crisp. Once the tea is prepared it can be used to treat upper respiratory infections and sore throats. To prepare the tea with loose leaves and flowers, boil for 10 to 12 minutes, straining out the mixture with a cheesecloth. It is suggested to strain the tea 2 or 3 times before drinking, or the naturally occurring hairs can irritate your throat.
I chose to make tea bags by sewing 2oz of tea in a coffee filter for convenience. 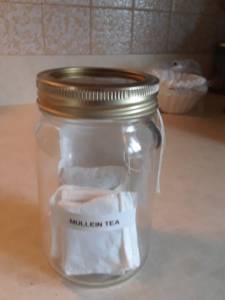 MULLEIN TEA
Boil 1 cup of water. Place tea bag in mug. Pour the boiling water into the mug and steep for 10 to 15 minutes. Drink tea 1 to 4 times daily as this helps break up coughs, making them more productive. Mullein tea has been used for centuries to treat infection and upper respiratory ailments.
I made the tea for myself to see if it could clear up the congestion in my upper airways. While drinking the tea my airways started to open up into a productive cough. Felt better the same day.

Disclaimer this Mullein should not be ingested or applied to any part of your body if you are suffering from Diabetes. It’s known to lessen the effect of medications used in the treatment of diabetes.
I hope you’ve enjoyed this blog and see that some weeds have more going on than you would suspect. I plan on exploring more plants, focusing on their healing abilities and
their other uses and hope to tell you more about them.
~Namaste~
Rita