What is that growing in my garden? 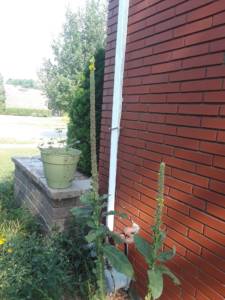 Thursday, July 5, 2018
We found an unusual plant growing in our butterfly garden. My plant ID app identified it as Mullein. After a little research, I found an abundance of uses for it. Mullein is not only known for antiseptic qualities and to treat upper respiratory ailments, but its leaves have been used as wicks for torches and band aids for thousands of years. 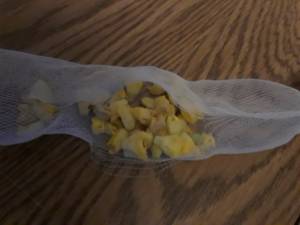 Over a few weeks, I prepared the plant for several different applications and tested it on myself or willing family members. 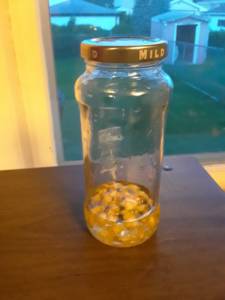 Kitchen Alchemy
Here are the little yellow flowers that come from the Common Mullein. The first project was cold oil extraction, in thus creating ear drops.
I placed the flowers in a clean jar with a lid and covered them with coconut oil. They are to sit in a sunny window for 7 to 10 days to steep. After steeping, the flowers need to be strained from the oil and stored in a dark glass bottle. 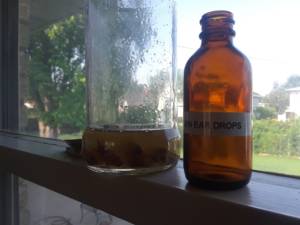 After 10 days the mixture has become gooey and brown, but ready to strain.
After straining I put the oil into a dark glass bottle with a dropper.

Directions for the use of Mullein Ear Drops
Use the drops at the first sign of an earache. Heat the oil to body temperature 98.6. Be sure to use thermometer. Apply 3 drops to the affected ear for 3 to 4 minutes and then drain. DO NOT USE ON A PUNCTURED EARDRUM.
Disclaimer this Mullein should not be ingested or applied to any part of your body if you are suffering from Diabetes. It’s known to lessen the effect of medications used in the treatment of diabetes.
I hope you’ve enjoyed this blog and see that some weeds have more going on than you would suspect. I plan on exploring more plants, focusing on their healing abilities and
their other uses and hope to tell you more about them.